FREDERICK, MD –  Today, State’s Attorney Charlie Smith sent a letter to members of the Rules Committee for the Maryland Court of Appeals to express his opposition to a proposed change in Rule 4-345, which gives the court the power of sentencing modification. Under a recent proposal, offenders receiving lengthy sentences for heinous crimes committed before the age of 25 or those that are 65 and older and deemed “not likely to be a danger to anyone if released” would be eligible for reconsideration of their sentence. Smith’s opposition to the change is driven by a strong desire to protect victims from the additional trauma of sentence modification hearings.

Smith wrote, “The age of the defendant at the time of the crime, or their age after they have served a significant portion of their sentence, has little import when compared to the devastating lifelong impact of these type crimes.  Parole already exists and, if appropriate, may be granted.  To change Rule 4-345 in the manner suggested is to chip away at a victim’s rights in the Criminal Justice System.” 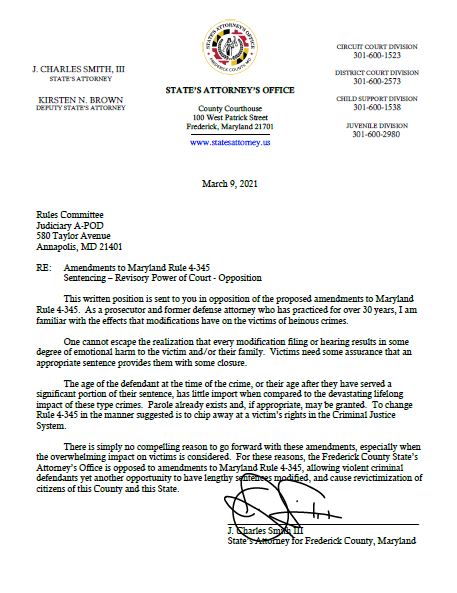 We had a great time meeting students today at the Hood College Career and Internship Fair! Thanks for having us! ... See MoreSee Less
View on Facebook
· Share

Thank you to Assistant State's Attorney Amanda Leatherman and her family for continuing to craft and donate State’s Attorney’s Office logoed face masks to our staff! We are so grateful for your time and generosity! ... See MoreSee Less
View on Facebook
· Share

All Frederick County Courthouse visitors age 2 or older, regardless of vaccination status, must wear a face mask while inside the building.